Looking for a cyberpunk theme game to play on your Nintendo Switch? Then, check out Cyber Protocol (eShop). Now, on a deal for $0.99!

I actually took a look at the game couple of times because I thought it's some kind of programming or coding game. I love that kind of game. Where you learn how to code and game at the same time. But, turn out it's not. Just a game theme where you 'hack' to save your android friend.

Cyber Protocol (eShop) is an arcade puzzle game set in the Cyberpunk scenario with strong and dynamic gameplay. You impersonate the main hero, whose mission is to bring his Android friend (G0X6) back to life by activating the protocol. 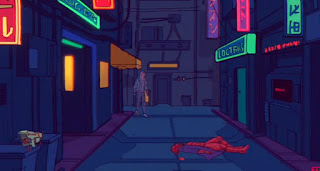 When I watch the site gameplay video, I wasn't exactly sure how you play the game. I was still wondering if I should get the game even though it's on a deal. I basically say, what the heck and make the plunge!
In the game, you 'hack' by going through level after level of puzzles that have many intricate traps that will zap you if you make the mistake. You won't exactly die, just that you have to restart from the starting point of the level. But, you can opt to save at half-way checkpoint so that you won't have to go all the way back.

It's not until I reach the 2nd and third level that it gets harder and harder. You have to be careful not to hit the firewall or stay for too long before being zap by traps. You'll have to think your way through those traps and move fast before being zap by laser or whatever.

This is a single playing game but you can invite friends or family members to challenge and see who can clear the puzzle faster.
Here's some more info on the game below: (Taken from game eShop game info)

I really like the music player. And, the song isn't bad either. I like listening to youtube music on my switch lite before I sleep. So, it'll be great to listen to some cyberpunk music available on this game. Again, I'm not sure why Nintendo doesn't have a music player on the switch!?

The Nintendo switch can definitely be more than just a gaming system. With programming learning software like FUZE4 and smileBASIC4, it becomes an educational tool. If we have a chrome browser app, we can surf, check emails, read ebooks and so much more!

Go get the game now before the deal is off!