Check it out!
Are you looking for a new interesting puzzle game to play? You might want to check out Evan's Remains (eShop link). Coming out this June 11th. I love to play puzzle games. But, I love it more when you include a story with it. That's what games are lacking nowadays, stories. A good damn story.

Well, in this puzzle game, you're trying to solve a mystery of a missing boy named Evan. A girl named Dysis is sent to find him. To find out what happened. On the island, you need to climb what seems to be an ancient puzzle wall to get to the other side. 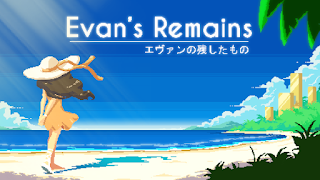 EVAN'S REMAINS LAUNCHES JUNE 11 ON NINTENDO SWITCH, PLAYSTATION 4, XBOX ONE & WINDOWS PC
Mystery Adventure Merging Puzzles with Visual Novel Elements Receives Multi-Platform Release Date
May 21st, 2020 -- Developer Matías Schmied and publisher Whitethorn Games announce their mystery-thriller puzzle adventure game Evan's Remains will launch June 11th on Steam for Windows PC, PS4, Nintendo Switch, Xbox One platforms for $6.99!
Evan's Remains is about finding a missing boy. The game combines logic-based platform puzzles with a narrative inspired by Japanese graphic adventure games. Follow the journey of Dysis in her attempt to find Evan.
"Evan's Remains tries to convey a strong feeling of mystery and to leave the player wondering -- just what is really going on here?," lead developer Matías Schmied said. "Like its inspirations - Ace Attorney, Ghost Trick, Danganronpa, Yume Nikki, and many others - we hope players will feel a profound sense of satisfaction as they slowly piece together the narrative."
Featuring gorgeous pixel-graphics and puzzles that must be solved using deduction over dexterity or skill, Evan's Remains invites you to sit back, relax, solve some puzzles, and immerse yourself in a story rich in mystery and punctuated by dialogue from a unique cast of characters. There are no enemies, no punishments, no failures, and no Game Over.
To find out more, visit: https://whitethorndigital.com/evans-remains
Discord: https://discord.gg/5su3nuc
Twitter: @maitan_69
Facebook: https://www.facebook.com/evansremains/
------------------------------------------------------------------------------------------
Play the game anywhere and anytime on the Nintendo Switch. That's why I love my switch lite. I can play this game on and off without having to turn on my Tv or computer. It's on 24/7 and it's not as heavy as a freaking brick!
Click here to get one now on Amazon!
If you guys have any game to promo or anything just hit me up through the contact me section. I do unboxing and gameplay videos.
*Shop the latest deals from Amazon via our links to support us. Tq in advance!
Subscribe to our blog and youtube channel for the latest post and video upload!