Yesterday, I just posted a video gameplay of Bloodstained: Ritual Of the Night as my main video for the blog post. Today, I'm sharing it again. I found out through my switch lite Nintendo news update that the game, had sold over a million copies worldwide. 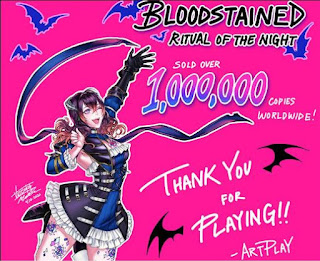 To be clear, at first I thought they sold a million copies on the Nintendo Switch, but it could be on all systems. It's important for me to know if it's the Nintendo Switch as you all know by now, I'm an ardent fan of the switch. Especially, now my switch lite.

Why is it important? Because, if they're successful on the Switch. That means, the Switch is a successful platform for game developers. Which means more games might be coming to the switch. It's a win for the Nintendo, game devs and of course us the gamers!


Check out the Development Roadmap highlighting the features we're working on in 2020!

The Nintendo Switch and switch lite are selling like hotcakes right now. I'm not sure if the pandemic has anything to do with it. In March alone they actually sold more than 4 million units. To think, some even thought the switch would fail.

One of the reasons for its success could be because of the portability. A gamer has been wanting to play their favorites pc/console game on the go for a long while. I know I'm one of them. That's why I bought Alienware m14x, my first gaming laptop.

Frankly, if I have the money, I'll still buy a gaming laptop. But, if you really want portability, and gaming on-the-go, the Nintendo Switch is way better. Granted, you'll have to buy again some of your favorite games. Which kinda sucks. Wish, Steam is available on the switch.

A gaming laptop is also a workhorse for some people who also needs a computer to do their work. You can't do that on a switch, yet. There aren't any Microsoft documents apps on the switch. You can't browse the website or check your emails.

I'm not sure why there's no music player, video player, Spotify, Netflix, audiobooks, ebooks, etc available on the switch. It's already almost 3 years plus and the Switch hasn't even reached it's potential yet. Early days, you might say but the gaming console isn't.

*Shop the latest from Amazon via our links to support us. Tq!