Actually, one of the triggers was a little rough in the middle of the transition point. I thought, maybe the hole wasn't aligned properly. After, spraying some good ol' wd-40, it was smooth again. And, I could play my favorite games without any problem.

The problem though is with the joysticks that I bought. They're fine if you're playing games with simple directional movement. But, you can't use it for playing fps shooter games like Call of Duty mobile or PUBG. The movement is limited and you won't be able to run.

I end up, just do away with the joysticks altogether. They need to design a good joystick that actually works with such games. There are drawbacks when using such triggers and joysticks. For the triggers, they might block your info view. Like how much money or points you have. It would have been better if you can customize the layout.

That's the thing with some of the mobile games. The dev doesn't seem to right out of the box allows you to customize how you control or play the game. Earlier when the iPhone first came out, it was cool to be able to play games with touch and gyro.

Then gamers started to clamor for gamepad. Especially for FPS shooter games. The touch control was so bad, but gamers put up with it because there was no choice. I actually got to become one of the faces for a zombie shooter game in 2008. The game was called Zombie Mangle. It doesn't exist anymore for some reason. 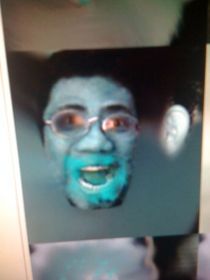 I am not sure what color zombie. Pictures were edited by the game dev.

It was one of those earlier FPS games. Playing it on my 2nd gen iPhone was really fun. Nowadays, games are much more complicated and better design. Thanks to better phone graphics and CPU technology of course. Console-like graphics are the norm nowadays. You can even play using your favorite Xbox one s or ps4 controller!

A mobile phone nowadays is not just a phone anymore. My Samsung Note 10+ can be connected to a monitor or tv via a docking station. Hence, mobile gaming is not just playing games on a mobile platform. It's becoming a mobile computing and gaming console.

Why are mobile game devs still creating 'silly' games on it? Why aren't Triple AAA game developers creating real console-like games with real controller support? They're actually concentrating on cloud gaming that will allow players to play console games on their mobile devices. They want your subscription money.

Yes, there are console-like games available for mobile devices. But, not all of them have controller support. Even though it's an FPS shooter game. That's what gets me. The other day, I read something from a gamer complaining about one of the mobile games. He said the way the games are created as if it's for a child. That actually struck me.

Gaming in the past, it used to be that you need good skills. You need a GOOD controller and fast fingers. Tapping or using your thumbs to move around on a glass screen is not fun. There are countless times when I lose track of the positions of the buttons on the phone. Because you can't 'feel' the buttons anymore.

All is not lost though. Finally, now you can play games using your Xbox or ps4 controller. Yes, it was 2008 when my face was on a mobile zombie FPS shooter game. Now, it's 2020. It took almost 12 effing years for that to happen.

Microsoft Xbox studios are going to have their game Forza Street available on mobile soon. It's already available for pc. When they announce it last month, I thought it was a new mobile game. Nope! I'm not sure about the android tablets.

I really hope that it was going to be like the Forza Horizon 4. I eagerly downloaded the game and before it starts, I already prep my Xbox controller. Guess what? No fcking controller support. It's all touch base and it totally suckz!

That's the level of thinking for mobile gaming. It's all design for a child!