There are many good joysticks and triggers for playing PUBG and Call of Duty Mobile (COD). I've been looking around doing my own research and I was thinking of something that could be fixed onto the phone without ever the need to take it off.

Currently, there aren't any really good design case with triggers and buttons for mobile gaming that's not too bulky or big. You want something that's able to be put inside your pocket and take it out whenever you feel like gaming.

Of course, you'll want to be able to use the phone like any other phone without looking like you're holding a Nintendo switch to your ears. I have kind of a rough sketch of my own mobile gaming case. It's just something I've been playing around and nothing serious though. Take a look at the design below. 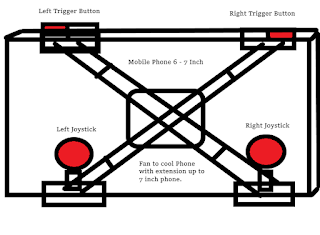 If there's a design engineer out there or a company looking to create new products, they should think of making a mobile game case controller. Something, that you'll be happy to put on and also use as any other normal phone. It has to be ergonomic, slim, slick and compatible with games that have controller support.

The mobile game case should be able to extend and fix it into a 5-7 inch sized phone. I think the biggest phone should be up to 7 inches. Any bigger then that would have been a tablet. Unless you're the type who loves using a tablet as a phone.

My design can definitely be improved a lot. Especially, when you want it to be practical and easy to produce. For one thing, the joystick could be flexible enough that you can just flip it and use it as a kickstand or put behind the phone when not in use. You can use one or both depending on your preference.

The triggers should be able to slide in and out along the phone side. Again, depending on your preferences This design would be for gaming using touch and controller combined. I think for most games, you'll usually prefer a joystick on the left side of the phone. The rest can be control by touch.

There are one or two trigger and joystick designs that I like and if you put them together could be something that I'm talking about. These products are also what I think would be best for playing PUBG and COD. Check them out below!

Well, you get the idea. If you're a pubg and Call of Duty gamer, you can mix and match the joystick and triggers. You can definitely, leave the triggers on the phone without ever taking it off but, you can't do the same for the joystick. Unless you can find one that can be flip to the back of the phone.

I wish there was a Bluetooth version of this kind of joystick and triggers available. So that you can also use it to play other games. Like soccer or racing game. Some shooters have a different kind of gamepad setup. Where you can't shift the touchscreen control.

Another thing I'm quite surprised about is how so few complete kits with joystick are available on the market right now. Most of the product designers only concentrate on the triggers. What about the joystick. For sure, I'm not the only one that hates playing games without a joystick?

Click here to check out more Triggers and Joysticks for mobile gaming!