Click here to get Nintendo Switch or Switch Lite and game on the go! 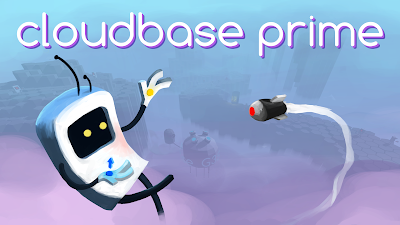 Bend the very land itself to your will and whim in Cloudbase Prime. Launch yourself with terrain to fly high and charge your boost engines. Explore varied levels, plumbing the weird depths of a gas giant's robotic wilderness. Climb huge robotic trees, swim inside giant jellyfish, and find lost cities in the clouds!

Cloudbase Prime boasts levels built of modular terrain that you can move to solve puzzles, block missiles, and launch enemies to their doom. Find new weapons, special ammunition, and powers to upgrade your robot suit. You'll find ample use for them in fast, bouncy combat and a variety of massive boss fights.

"The key to your survival is not found in the barrel of a gun but in the terrain-manipulating Architect tool... Cloudbase Prime is shaping up handsomely." - Rock Paper Shotgun “[Cloudbase Prime] is a lovely, weird little FPS that more people should try. Not quite like anything else on PC.” - Dominic Tarason (RPS, PC Gamer, PCGamesN) "Great visuals, fun gameplay, and hilarious audio make [Cloudbase Prime] a game we can't recommend highly enough." - Alpha Beta Gamer "Ridiculous, Over-the-Top, Hilarious, and Simply Spectacular. 10/10" - GameSkinny

Cloudbase Prime started its life as a 7DFPS entry in 2012. Floating Island's founder Tyrus Peace designed the game to be a fun first-person platformer with a jump/launch mechanic that required the player to look down. This was partially inspired by how good the platforming in "Jumping Flash!" felt, but hoped to be more actiony with mouse-look aim and terrain-moving superpowers. Tyrus liked it, and other people liked it, too. So he kept working on it, intermittently. He started working on it full-time in late 2015 and released the PC edition in 2017 on Steam, Humble Store, and itch.io -- where it's currently available to purchase and play for $9.99 on Windows, Mac, and Linux platforms.

Floating Island Games is a small dev team composed of Tyrus Peace. Its goal is to make modern games that remind of old feelings while allowing Tyrus to stay home and help raise his family.

Nintendo Switch is a trademark of Nintendo.

You can also contact me (freaker126) via my contact form if you want to sponsor and want me to do a gameplay video of your game on my youtube channel and promo on my blog. Also, do product sponsor unboxing video. Tq!


P.S. Click here to get Nintendo Switch or Switch Lite and game on the go!